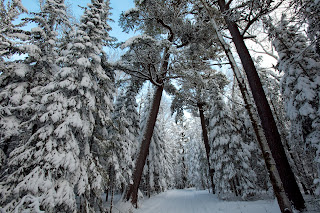 Birthday shoes.com asked me to share my thoughts about a minimalist shoe alternative for winter running conditions.  If you’re like me and live in a colder climate you’ve discovered the Vibram Five shoe we all love is not exactly the best in cold weather.  The Vibram five finger Flow is suppose to be the shoe of choice in cold weather but here in northern Minnesota where the daytime temps can hover in the double digits below zero for a week or more, you really need more protection than a five finger shoe can offer. By late November my feet were just not feelin the five finger love they had during the warmer months so I began to cobble together a multi-layered system that might seem kinda kooky so bare with me as I explain.

I start with a traditional running sock, perhaps a smart wool ankle high. From there it gets kind of weird.  Over the wool sock I throw a Speedo neoprene aqua fin sock. That’s right a neoprene bootie that I usually wear with flippers in the pool for swimming. I am a triathlete and swim about 6000 yards a week so the bootie was something I already had lying around the house. The last layer is the piece I had to search for. I slip on something called an O’Neill Reactor Beef boot. The O’Neill reef boot is the brainchild of Jack O’Neill a coastal California surfin Kat who started his company back in 1952 and is credited with inventing the modern day wetsuit.

The neoprene boot is designed to protect surfer’s bare feet from sharp, rocky coral.  Jack was determined to beat Mother Nature at her game by designing gear that would allow surfers to ride the waves in the bone chilling cold waters off the coast of San Francisco. The boot design really works well as a minimalist winter running shoe. It slips on like an old man’s galoshes over just about anything you put on your feet first. The reef boot sole is actually thinner that the Vibram five finger, which I did not expect.  It greatest attribute is its super sticky sole complete with an aggressive tread pattern that does amazingly well over ice and snow. 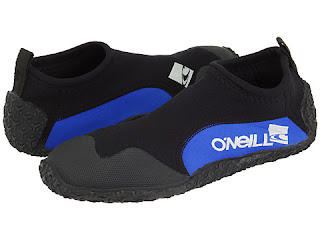 The thin sole flexes so well that from my experience it seems to allow me even greater control.  I’ve run many winters in traditional rigid sole running shoe and on snow its like dropping a rock into a pale of water, because it displaces everything under foot, causing a great deal of instability.  The Five-finger and the reef boot flexibility allow you to tip toe, even creep up snow and ice greatly reducing the likelihood of slippage. My new layering system with its multiple neoprene layers creates a nearly waterproof barrier between my feet and the cold snow. This amounts to two separate temperature zones, which is something you’ll appreciate on extremely cold days.  The only down size is my toasty warm feet have no place to send their moisture so guess what, I come home with warm sweaty feet, nothing a little soap and water can’t fix.  All in all it is the best solution I have found for running in extreme cold.  Did I mention the shoes are less than $25.00 at many online retailers like Swim outlet.com. The Speedo aqua fin socks cost about $12.00 and are also available online.  Your needs may vary depending on your climate and you may find that the reef boot and a pair of socks is all you need. With winter weather conditions gripping nearly every corner of the U.S in this La Niña year the O’Neill Reactor Reef Boot might be the solution to your minimalist footwear running needs this winter.
Posted by Dudley at 8:54 AM No comments: